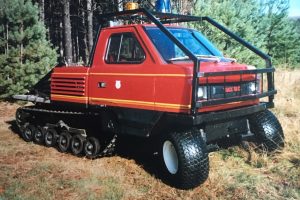 This certainly was a tight race between our 3 finalists:
Glenn Simmonds
Dwayne and Jen Dennis
Joanne Forrest

Each of the finalists were able to provide a great deal of information about the Mystery Machine. The tie was broken when only one person could come up with its nickname.

And… The winner is…Joanne Forrest
Joanne will receive a $20 gift certificate from The Dwight Market and Pharmacy (drawn at random).
Congratulations to our 3 very knowledgeable finalists.

The Mystery Machine was called a “Track Truck”. It was manufactured by ASV (All Season Vehicles). The company was co-founded by Edgar Hetteen and Gary Lemke. Hetteen was of course the founder of Polaris (1945) and later Arctic Cat (1961). Lemke was the owner of the largest Arctic Cat dealer in the USA .
As a dedicated snow groomer, it was quite unique in its day. It had all rubber tracks and even had a patent on the steering system. The steering wheel not only controlled the front wheels, it also controlled the speed of the tracks, which actually did the turning.
As trail grooming was previously done by Ski-doo Alpines, this monstrous, almost 3 ton, vehicle was affectionately called “The Beast” or “Big Al” (yes, you guessed it , “Al” for Algonquin) by the ASC.
Our first Track Truck was a demo model purchased in Nov of 1987 at a cost of $33,000.
Then, in Oct 1988, a brand new Track Truck was purchased at a cost of $46,000.
While a lot more money than an Alpine, Big Al was the future of trail grooming.
Mystery solved.